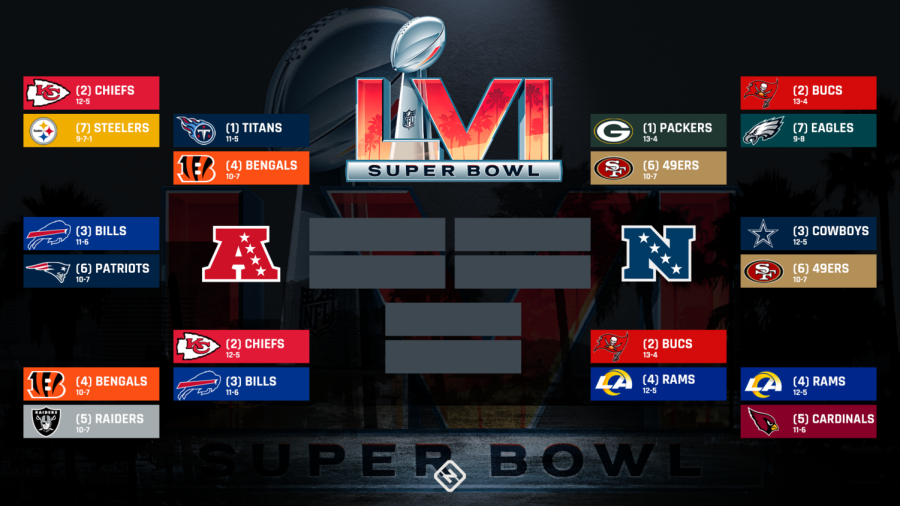 As the Super Wild Card weekend ended on the 17th, it was sure a wild one. With blowout after blowout throughout the weekend, it left many NFL fans shocked such as the San Francisco 49ers beating the Dallas Cowboys, Buffalo Bills dominating the New England Patriots, and the Los Angeles Rams crushing the Arizona Cardinals. Now comes the Divisional rounds, where in the AFC the Bengals and Titans will go at it Saturday afternoon and the Green Bay Packers are going against the 49ers Saturday night. In the NFC, the Chiefs and the Bills will play Sunday night while the Tampa Buccaneers will go against the Rams Sunday afternoon.

With how the season has been playing out, it is hard to put a definite answer of who is going to advance to the next round of the playoffs, but by the way things are going, there is some clear winners coming out of this round.

First off we look at Bengal’s vs. Titans. Looking at this matchup, this is probably the toughest one to try to choose who will win because of how the two teams  have been playing. We have the Bengals who have been playing amazing these past couple of games, with franchise QB Joe Burrow leading the way with 4,600+ yard and 46 TDs so far this season. The Bengals defensive is good, nothin special, but enough to contest good teams. On the contrary, the Titans have one of the best offenses in the league, with two great wide receivers in Julio Jones and A.J. Brown, a phenomenal running back in Derrick Henry, and a great QB in Ryan Tannehill. The Titans also have solid defense, but nothing to special about it. Comparing these two side by side, my heart is rooting for the Bengals but in reality, it should be a cake-walk for the Titans.

Next we look at Bills vs. Chiefs, one of the most enticing playoff matchups we’ve had in years. On the Bills side we have star QB Josh Allen, who is putting up great numbers this year, and on the Chiefs side we have former MVP and Super Bowl champion Patrick Mahomes, who is debatably one of the best QB’s ever. The Bills came off of a historic blowout game vs the Patriots, outscoring them 47-17, and  they were the first team not to commit a turnover, attempt a field goal, and punt a football in NFL history. Nevertheless, this matchup is going to be one that no one is going to be able to forget. Personally, I am taking the Chiefs on this matchup because of the fact that they have been in situations like this for the past two  year, and have Patrick Mahomes on the team. Also, there offense is still putting up historical numbers each year. It’s still going to be a close game and one that no NFL fan wants to miss.

Lets look at 49ers vs. Packers. The 49ers unexpectedly pulled an upset on the Cowboys at the AT&T Arena with the score 23-17. With the 49ers shocking the whole league and it’s fans, they are just beginning of there treacherous playoff journey, having to face the No.1 seed Green Bay Packers. There is great things to say about the 49ers, with a great coach, an explosive offense, and solid defense. But with injury’s piling up, starting with pro bowler Defensive End Nick Bosa suffering from a concussion and most importantly star QB Jimmy Garoppolo who is suffering from a torn ligament on his right thumb and a sprained left shoulder. With these injury’s, both players are still expected to play on Saturday. I’m taking the Packers on this one, because they have been having a great season both offensively and defensively and Aaron Rodgers have proven over and over again that he is the 2021-2022 NFL MVP. The 49ers had a nice run, but I think it will be a short one this offseason.

Finally, we have Buccaneers vs. Rams, which will be one of the most even matchup’s in my opinion. The Buccaneers are the reigning champions of the Super Bowl, being lead by Hall of fame QB and debatably the best player the NFL has ever seen, Tom Brady. His leadership automatically gives everyone on the Bucs squad a confidence booster. On the other hand, veteran QB Matthew Stafford is going to be leading the Rams, with Aaron Donald hopefully holding down the defensive end. The Rams especially are good at the defense factor, but with weapons like Odell Beckham Jr. and Cooper Kupp, things have turned for the better this year. This is probably one of the hardest decisions to try and make but looking at the rosters right now, I am going with the Rams. Like previously mentioned, the Rams are solid on both offense and defense, with little to minor injury’s on their rosters. On the other hand, the Bucs are really injured on the offensive side, and are only decent on defense. This is going to be a close matchup, but I feel like the Rams are going to do something special.

Overall, these decisions are just simple predictions, but how the way the season has been going, anything can happen in these next four games. This will some of the best football we have seen this season.